Where the Buddha performed Great Miracles 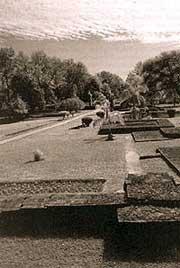 "When the time came for the contest, the Buddha cast a mango seed on the ground; instantly the seed took root, and a great mango tree arose to shade the hall. After defeating the six philosophers and converting them to his teaching, the Enlightened One performed the Great Miracle of the Pairs.

"Standing in the air at the height of a palm tree, flames engulfed the lower part of his body, and five hundred jets of water streamed from the upper part. Then flames leapt from the upper part of his body, and five hundreds jets of water streamed from the lower part. Then by his magic power, the Blessed one transformed himself into a bull with a quivering hump. Appearing in the east, the bull vanished and reappeared in the west. Vanishing in the west, it reappeared in the north. Vanishing in the north, it reappeared in the south. ... Several thousand kotis of beings, seeing this great miracle, became glad, joyful, and pleased."

Another of the four places common to the buddhas of this world is Shravasti, the site regarded as their chief residence and the place where the holders of erroneous doctrines are publicly defeated. Indeed, Shakyamuni spent twenty-five rainy seasons there and also performed many great miracles.

When the Buddha accepted in Rajgir the merchant Anathapindika's invitation to spend the second rainy season at Shravasti, it was on the condition that proper facilities for all his monks would be available. Anathapindika and Sariputra examined the area and found only the park of Prince Jeta to be suitable for such a large assembly of monks. However, the prince was unwilling to part with it for less than the number of gold coins that would cover the area. Undismayed, the merchant proceeded to cover all the ground with gold coins. When but a small portion remained uncovered, the prince asked him to desist and announced that he himself would build a vihara on the spot, some say using the gold he had received for the purpose. The merchant also built a vihara, as did King Prasenajit later. These were the principal buildings used by the Buddha on his first visit to Shravasti. The park with its buildings became known as Jetavana Grove.

Hsuan Chwang states that during its most magnificent period, Jetavana had temples, meditation halls, monks' chambers, bathing places, a hospital, pleasantly shaded tanks and a well-stocked library with reading rooms. It was altogether an ideal place for practising the Buddha's teachings, many of which were first given here.

One of the first statues of Shakyamuni originated at Jetavana. Ordered by King Prasenajit, it was made of hardwood. King Prasenajit placed it at his seat in the vihara. Fa Hien tells that when Shakyamuni next visited Jetavana, the statue came out to meet him. He told it to return to its place, saying that it would serve as a model for others after his passing away. The Jetavana vihara which housed this image was once an elaborate seven-storied building. It eventually burned down but the image survived and a two-storied structure was built in its place. At the time of Hsuan Chwang the statue was kept in a brick shrine. 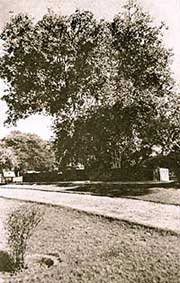 Ananda once asked Buddha to allow a tree to be planted at Jetavana because when the Buddha was not present at Jetavana his followers had nowhere to place their offerings of flowers and so forth. Maudgalyayana brought a seed of the bodhi tree and when the tree grew the Buddha is said to have blessed it by spending one night meditating under it. This is now known as the Ananda bodhi tree.

The Chinese pilgrims mention a number of stupas in the park commemorating various events. One marked the occasion when the Buddha found a sick monk unattended and languishing in his own filth. Shakyamuni bathed and nursed the monk himself and exhorted the other monks to care for each other similarly in the future. Another stupa marked the spot where some non-buddhists, wanting to defame the Buddha, murdered a woman and left her body behind the monastery. Others marked the places where Shakyamuni walked and sat.

When Ashoka visited Jetavana he erected a great pillar on either side of the eastern gate, the left surmounted by a wheel and the right by an ox. Near the monastery and beside the well used by the Buddha, he built a stupa enshrining a relic. It is taught that this was one of the mahavihara's most flourishing periods, after which it was somewhat neglected. However, archaeological evidence has shown a revival during the Kushan period of the first century and much reconstruction. Later, during the Gupta period, even when brahmanism was once again ascendent, Jetavana received new support. Many of the present ruins show the styles and ornaments of the Guptas.

Fa Hien found decay evident but was welcomed by resident monks, who were astonished to see a brother from the land of Han. Two centuries later Hsuan Chwang found the place deserted, but soon after his visit another revival occurred, as evidenced by the traces and images from the eighth and ninth centuries that remain. As in other places, the monastic tradition persisted here well into the twelfth century, when the muslim invasions became overpowering. Records show that Vidhyadhara, a minister to King Madanapala of Kanouj, built a vihara in 1119. An inscribed copper plate dated at 1130 found amongst the ruins states that the former king's son Govindacauda made a gift of six villages to Buddhabhattoraka and the monks of Jetavana.

The Jetavana Grove was a short distance south of the prosperous city of Shravasti, the capital of Koshala, which stood on the banks of the Achiravati River. Here Prasenajit had his palace, and close to it built a monastery. Nearby was the vihara of Mahaprajapati, who was Shakyamuni's stepmother and the first woman admitted to the Order. A short distance away is a large, ruined stupa marking the place where Angulimala the murderer attained arhatship and where his body was later cremated. Outside the city was a forest where once lived a community of 500 blind men, all of whom regained their sight when the Buddha came and preached to them.

Apart from these associations, Shravasti is best remembered as the place where Shakyamuni defeated the holders of other doctrines. Some accounts say this was accomplished by debate, others by miracles; perhaps there were both. The leaders of India's six main philosophical schools had challenged the Buddha to a contest of miraculous powers many times as he wandered through the surrounding kingdoms. Finally, in his fifty-seventh year he accepted at Shravasti. King Prasenajit built a hall especially for the event; in it seven thrones were erected. On the first day of spring, the six other teachers took their seats and Shakyamuni came to his, flying through the air. He sent forth fire and water from his body and the hall was destroyed, then reformed as a transparent palace. Planting his tooth-pick in the ground, he caused a great tree to spring up, fragrant and fully laden with flowers and ripe fruit. He multiplied his body infinitely, filling all space with buddhas expounding the Dharma. These and many other miracles he performed and in eight days utterly defeated his opponents, whose followers adopted the buddhist doctrines. For a further seven days he continued to show miracles and give teachings to the great assembly. Both Chinese pilgrims describe a tall temple containing a statue of Buddha, which stood outside Jetavana Grove in commemoration of these events. Nearby is the place where Devadatta, failing in his attempt to scratch the Buddha with poisoned nails, finally went down to hell.

Further south were various places associated with King Vaidraba, successor to Prasenajit, who destroyed Kapilavastu and killed many of the Shakyas within the Buddha's lifetime.

The ruins of Shravasti were rediscovered in 1863 by General Cunningham near the village of Sahet Market. The city ruins lie virtually untouched and are still enclosed by ramparts. The remains of the monasteries and stupas of Jetavana have been well excavated and the many images and other findings are contained in the Lucknow Museum. A new park has been created around these ruins with flowers and trees shading the lawns. In this case restoration has regained some of the qualities that made the place attractive of old; peace and tranquility pervade it. Three new buddhist temples have been built alongside the park, one of which was founded by two Burmese ladies and another by a Ceylonese monk. Both offer accommodation to pilgrims. A fine Tibetan stupa has recently been completed in the courtyard of this latter building.

The third temple has a sad story. It was built many years ago through the efforts of a solitary Chinese monk, who, unfortunately, died before its completion. Now the Chinese temple and a seven-storied pagoda with a number of out-buildings are empty and locked, pending a legal decision of possession and responsibility. Apart from the intrinsic value of these constructions, it would be a fitting tribute to Fa Hien and Hsuan Chwang if they were to be restored and opened.