"After taking seven steps,
he speaks with a voice like Brahma’s:
‘The destroyer of old age and death
has come forth, the Greatest of Physicians.’
Looking fearlessly in all directions,
he pronounces these words rich in meaning:
‘I am the first,
the best of all beings,
this is my last birth."
Voice of the Buddha 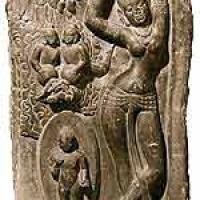 Lumbini was the birthplace of the Buddha and is now located near the Nepal-India border north of Gorakpur.

Immediately before his birth, the bodhisattva was lord of Tushita deva realm. There he had resolved to be reborn for the last time and show the attainment of enlightenment to the world. He had made the five investigations and determined that this southern continent, where men lived for one hundred years, was the most suitable place and, as the royal caste was then most respected and the lineages of King Suddhodana and his Queen Mayadevi were pure, he would be born as their son, a prince of the Shakya dynasty. Placing his crown upon the head of his successor Maitreya, the bodhisattva descended from Tushita to the world of man.

During the night of his conception, Queen Mayadevi, who is to be the mother of all the thousand buddhas of this aeon, dreamt of a great white elephant entering her womb. The earth trembled six times. It is said that in the manner of all bodhisattvas in their final birth, he remained sitting cross-legged for the whole time within the womb. Furthermore, all buddhas are born in a forest grove while their mother remains standing.

At the appointed time Queen Mayadevi was visiting the Lumbini Garden some ten miles from the Shakya city of Kapilavastu. Emerging from a bath with her face to the east, she leant her right arm on a sala tree. The bodhisattva was then born from her right side and immediately took seven steps—from which lotus flowers sprang up—in each of the four directions. To each direction he proclaimed as with a lion's roar: "I am the first, the best of all beings, this is my last birth.'' He looked down to predict the defeat of Mara and the benefiting of beings in the lower realms through the power of his teachings. He then looked up to indicate that all the world would come to respect and appreciate his deeds.

The gods Brahma and Indra then received him and together with the four guardian protectors bathed him. At the same time two nagas, Nanda and Upananda, caused water to cascade over him. Later a well was found to have formed there, from which even in Fa Hien's time monks continued to draw water to drink. The young prince was next wrapped in fine muslin and carried with great rejoicing to the king's palace in Kapilavastu.

Many auspicious signs accompanied the bodhisattva's birth. Also, many beings who would play major parts in his life are said to have been born on the same day: Yasodhara, his future wife; Chandaka, the groom who would later help him leave the palace; Kanthaka, the horse that would bear him; the future kings Bimbisara of Magadha and Prasenajit of Koshala; and his protector Vajrapani. The bodhi tree is also said to have sprouted on the day of Buddha's birth.

When Ashoka visited Lumbini two centuries later, his advisor, the sage Upagata, perceived by clairvoyance and described all these events, pointing out their sites to the emperor. Ashoka made many offerings, built an elaborate stupa and erected a pillar surmounted by a horse capital. When Hsuan Chwang saw it, the pillar had already been destroyed by lightning. Nevertheless, when discovered at the end of the last century the inscription which remained on the present ruin was sufficiently legible to clearly identify the site as Lumbini.

The prince, now named Siddhartha, spent his first twenty-nine years in Kapilavastu. There he performed three more of the twelve principal deeds of a buddha. Surpassing all the Shakya youths and even his teachers in all fields of learning, skill and sport, he showed that he had already mastered all the worldly arts.

One day while still a child he was left unattended beneath a tree as his father performed the ceremonial first ploughing of the season. He sat and engaged in his first meditation, attaining such a degree of absorption that five sages flying overhead were halted in mid-flight by the power of it.

Later he was married to Yasodhara and experienced a life of pleasure in the palace amongst the women of the court. Yet despite King Suddhodana's efforts to protect him from unpleasant sights, one day when riding in his chariot through Kapilavastu he happened to see a man feeble with age, another struck down with sickness, and a corpse. He immediately realised the suffering nature of men's lives. Then he saw a monk of holy countenance, and recognized his path and vocation.

It is said that a buddha renounces the world only after seeing these four signs and when a son has been born to him. Accordingly, seven days before Siddhartha would have been crowned as his father's heir, a son, Rahula, was born to Yasodhara. Without further delay Siddhartha told his father of his resolve to leave the transient luxury of worldly life and live as a renunciate in order to discover the causes of true happiness and the end of misery.

Suddhodana was reluctant to let him go. Therefore, riding the horse Kanthaka and accompanied by the groom Chandaka, Prince Siddhartha left Kapilavastu with the aid of the gods. Some distance away he performed the great renunciation, cutting off his hair and donning the robes of an ascetic. He sent Chandaka back to the palace with his jewels and horse, and entered into the homeless life.

Some years later, after attaining enlightenment, Buddha returned briefly to Kapilavastu at his father's invitation. The Buddha and his followers were welcomed and treated well by the king and the people, who listened to his teachings. Five hundred Shakya youths became monks at this time, including Rahula, the Buddha's own son, Nanda, his half brother, and Upali, the barber, who was to later become one of the Buddha's most important disciples.

The splendour of Kapilavastu did not last for long, for the city and many of the Shakya clan were destroyed by the rival king Vaidraka even within the Buddha's lifetime. When the Chinese pilgrims visited the area they found nothing but ruin and desolation and merely a handful of people and monks dwelling there. Yet all the sites of the events mentioned in the early scriptures were pointed out to them, and several of these were still marked by stupas. After this, the area was lost in jungle and earlier in this century, was still only accessible by elephant.

Now only Lumbini, the birthplace itself, has been identified with certainty. Kapilavastu has been but tentatively located. At present these sites are still being explored and some ruins have been unearthed. The remains of Ashoka's pillar can be seen, as well as a shrine of indeterminate age dedicated to Queen Mayadevi. A Nepalese buddhist temple was built in 1956 and a Tibetan monastery of the sakya order was completed in 1975, which, as well as possessing a beautiful and elaborate shrine, is well illustrated within by traditional murals. Here many young monks are studying and practising the Buddha's teachings, thereby both aiding the revival of Lumbini as a place of buddhist practice and preserving the great traditions lost in Tibet.

The Nepalese temple, which is cared for by a monk of the theravada tradition, also has rest houses within its grounds, provided by buddhists from Japan and the former U.N. General Secretary U Thant. In cooperation with the Nepalese Government, UNESCO is also helping to improve and develop this first of the eight pilgrimage places.