Where the Buddha converted Sariputra and Maudgalyayana

"King Ajatasatru possessed a very ferocious elephant. Devadatta, hearing that the Buddha was coming to Rajgir, arranged to have the elephant escape. As the Buddha came toward the city, Devadatta went to the palace terrace to see the Buddha killed, but when the elephant came rushing at the Buddha, the Enlightened One tamed the elephant with a few words, and the ferocious beast knelt at this feet."

When Gautama the ascetic first visited Rajgir on his way to Bodhgaya he was met by King Bimbisara. The king was so impressed by the bodhisattva that he tried every means to persuade him to stay. Failing in this, he received a promise that Gautama would return to Rajgir after his enlightenment. Accordingly, after teaching in Sarnath, the Buddha travelled to Rajgir, the royal capital of Magadha, followed by over a thousand monks of the new order.

King Bimbisara welcomed them all and offered the Veluvana Bamboo Grove. This was to be the first property of the Order and one of the Buddha's favourite residences. The site was ideal for a monastic order, being not too near the city, calm by day and night, free from biting insects and having mild air and tanks of cool water. Thus it was suited to the practice of meditation, and here Shakyamuni passed the first rainy season retreat following his enlightenment. He was to return to this place for several rainy season retreats later in his life. When Hsuan Chwang visited Rajgir he saw a monastery and the Kalanda tank, where Shakyamuni bathed and which still exists. Close to this stood an Ashoka Stupa and a pillar surmounted by an elephant. Not far away King Ajatasatru had built two stupas, one over the portion of the Buddha's relics that he had received, the other over half of Ananda's body. Later Ashoka unearthed the first of these to obtain relics for his 84,000 stupas.

Perhaps the most important event of the Buddha's first visit to Rajgir was the conversion of Sariputra and Maudgalyayana. The story of their conversion is as follows. Ashvajit, last of the five ascetics to be converted by Buddha, was making his alms round one morning and happened to meet Sariputra. Sariputra was greatly impressed by the monk's noble and subdued demeanor, and asked him what teachings he followed. Sariputra immediately attained arhatship, and when he repeated what he had heard to his friend Maudgalyayana, he also instantly achieved the same. Later, stupas were erected at the places associated with these events. The two left their teacher Sanjaya and came with 500 of their former followers to meet the Buddha. Buddha welcomed both as his chief disciples, Sariputra having the greater intelligence, Maudgalyayana wielding the greatest miraculous powers. Both were born near Rajgir and later, retiring to their respective villages, entered nirvana before the Buddha did.

During his stay in Rajgir, Shakyamuni received two significant invitations: one from his father King Suddhodana, the other from a wealthy merchant who wanted him to spend the next rainy season in Shravasti. Accepting both, the Buddha returned briefly to Kapilavastu and sent Sariputra to Shravasti to prepare for his visit there.

Shakyamuni later visited Rajgir on a number of occasions. On several of these, attempts were made on his life. Once a lay follower of the nirgrantha jains concealed a fire-pit in front of his house and invited the Buddha to a meal of poisoned food. However, the pit changed into a lotus pond with a flower bridge and the Buddha proved that one freed of all inner poisons could not be harmed by external means. At another time he predicted the birth of a son to the wife of a jain, who in defiance killed her. But as her body was being burnt, the child came forth from amidst the flames. Stupas marking these places were later seen by the Chinese pilgrims.

King Ajatasatru, who had usurped his father Bimbisara's throne and allowed him to die in prison, came under the evil influence of Shakyamuni's jealous cousin Devadatta, who had tried to force the Buddha to permit him to lead the Order. Failing to achieve this, Devadatta invited the young king to harm the Buddha. Professional assassins were hired for this purpose, yet in the end they fell at the Buddha's feet in devotion. The king then let loose a maddened elephant from his palace, but the animal, affected by the Buddha's presence, fell on its knees out of homage to him. It is also in Rajgir that a young boy later to be reborn as the great king Ashoka came to him and offered him a handful of sand, wishing it were gold.

Yet the most important of all associations of the Buddha with Rajgir is that with Vulture's Peak, a small mountain just outside the city. Here, sixteen years after his enlightenment, he set forth the second turning of the wheel of Dharma to an assembly of 5,000 monks, nuns and laity, as well as innumerable bodhisattvas. This collection of teachings, which extended over twelve years, includes the Saddharmapundarika Sutra and the Surangama Samadhi Sutra, as well as many Prajna-paramita Sutras, which, as the Buddha himself told Ananda, contain the very essence of all his teachings. Mahakashyapa recorded these latter teachings and Shakyamuni placed them in the custody of the nagas until such time as men were ready to receive them. The Buddha's respect for Mahakashyapa was such that when they first met, the two exchanged cloaks. The great disciple now resides within the Gurupada Mountain near Bodhgaya. Here he awaits Maitreya, upon whom he will place the cloak of Shakyamuni.

When the Chinese pilgrims visited Vulture's Peak they found the summit green and bare. Fa Hien mentions a cave and Hsuan Chwang a hall slightly below it, where the Buddha is said to have sat and preached. Here also he once reached through the mountain with his hand to calm Ananda, whose meditation was being disturbed by Mara in the form of a vulture. Before the cave were the walking and sitting places of the previous buddhas, and a stupa where the Saddharmapundarika Sutra was taught. 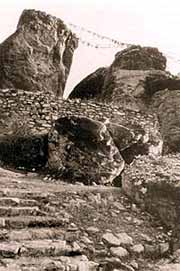 King Bimbisara built a causeway leading up to the hill. At the foot of the hill was Amaravana, the mango grove offered to the Buddha by the physician Jivaka. The remains of what was once a monastery may still be seen here. According to Hsuan Chwang, at one time on Vulture's Peak there was a monastery occupied by many meditators and several arhats.

The final journey of Buddha's life, which ended with the mahaparinirvana at Kushinagar began at Rajgir. Shortly after this, the First Council—an assembly of 500 monks presided over by Mahakashyapa—met under the patronage of Ajatasatru in the Shrataparna Cave, a short distance southwest of Veluvana Bamboo Park, and compiled the Buddha's teachings into a collection known as the Sthaviranikaya. A stupa once marked the spot where, with great exertion, Ananda achieved arhatship on the night before the council in order that he might attend.

Ashoka later erected a stupa in honour of this First Council at the place a distance west of Shrataparna Cave where at the same time the mahasanghikas, regarded by some as proto-mahayanists, compiled their canon. According to Nagarjuna, an assembly of bodhisattvas also met on Vimalasvabhava Mountain, located to the south of Rajgir, and compiled the mahayana scriptures. Nagarjuna states that Samantabhadra presided over this meeting, while Vajrapani recited the Sutras, Maitreya the Vinaya and Manjushri the Abhidharma.

The sites of many of these events may still be found in and around Rajgir, which is also a flourishing pilgrimage centre of hindus and jains. A Burmese temple offers resting facilities for pilgrims and there is a new Japanese temple near the remains of Ajatasatru's stupas. Vulture's Peak retains a quiet peace, but just as Pa Hien warned of lions and tigers at certain places of pilgrimage during his lifetime, here present pilgrims should beware of bandits.

The Ratna Girl Hill above the Vulture's Peak is now crowned by the beautiful Vishwa-Shanti Stupa, built recently by Japanese buddhists. On four sides golden statues of the Buddha depict his four great actions: birth, enlightenment, teaching and passing away. In a nearby temple, Japanese monks continue their strident practice of resounding sutra and drum.

Lastly, one may remember that the Buddha sent the sixteen arhats to various parts of the world to safeguard his doctrine, and one of them, Kshudrapanthaka came to and still resides on Vulture's Peak.