Sarnath—first turning of the Wheel of Dharma 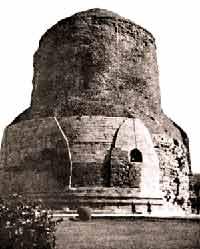 "Keep in mind this most beautiful wood,
named by the great rishi,
where ninety-one thousand kotis of Buddhas
formerly turned the Wheel.
This place is matchless, perfectly calm,
contemplating, always frequented by deer.
In this most beautiful of parks,
whose name was given by the rishi,
I will turn the holy Wheel."
Voice of the Buddha

All the 1,000 buddhas of this aeon, after demonstrating the attainment of enlightenment at Vajrasana, proceed to Sarnath to give the first turning of the wheel of Dharma. In like manner, Shakyamuni walked from Bodhgaya to Sarnath in order to meet the five ascetics who had left him earlier. Coming to the Ganges, he crossed it in one step, where King Ashoka later made Pataliputra his capital city. He entered Benares early one morning, made his alms round, bathed, ate his meal and, leaving by the east gate of the city, walked northwards to Rishipatana Mrigadava, the rishi's Deer Park.

There are many legends about the origin of this name. Fa Hien says that the rishi was a pratyeka buddha who had dwelt there but, on hearing that the son of King Suddhodana was about to become a supreme buddha, entered nirvana. Others mention 500 pratyeka buddhas and Hsuan Chwang mentions a stupa marking the site of their nirvana.

The name Deer Park derives from an occasion in one of Shakyamuni's former lives as a bodhisattva, when he was leading a herd of deer. After much indiscriminate plundering of the herd by a local king, an agreement was made with him that one of their number would be offered only when necessary. The turn came of a doe, who was shortly to give birth and wished to delay until then. The bodhisattva offered himself in her stead, which so impressed the king that he not only resolved to refrain from killing deer in future but gave the park to them as their own.

At this place the five ascetics had resumed their austere practices. When they saw the Buddha approaching, thinking him still to be the Gautama who had forsaken their path, they decided not to welcome him. Yet, as he neared they found themselves involuntarily rising and paying respect. Proclaiming that he was the Buddha, Shakyamuni assured them that the goal had been attained. Hsuan Chwang saw a large, dome-shaped stupa on this spot, where a large mound, probably its remains, surmounted by a muslim monument now, stands a short distance south of the park.

During the first watch of the night the Buddha was silent, during the second he made a little conversation and at the third began the teaching. At the spot where all the buddhas first turn the wheel, 1,000 thrones appeared. Shakyamuni circumambulated those of the three previous buddhas and sat upon the fourth. Light radiated from his body, illuminating the 3,000 worlds, and the earth trembled. Brahma offered him a 1,000-spoked golden wheel, and Indra and other gods also made offerings, all imploring the Buddha to teach.

Thus, inviting the gods and all who wished to hear, and saying that he spoke not for the purpose of debate but in order to help living beings gain control of their minds, Shakyamuni began the first turning of the wheel of Dharma. He taught the middle way, that avoids the extremes of pleasure and austerity, the four noble truths, and the eightfold path. Kaundmya was the first of the five ascetics to understand and realize the teaching; Ashvajit was the last. All eventually became arhats.

The teachings included in the collection known as the first turning of the wheel, which began here, extended over a period of seven years. Other teachings, such as those on the Vinaya and on the practice of close placement of mindfulness, were given elsewhere, but the wheel was turned twelve times at Sarnath.

From the time of the Buddha, monastic tradition flourished for over 1,500 years on the site of the Deer Park. Amongst the many ruins, archaeologists have found traces dating from as early as the third century B.C., and the existing inscription of Ashoka's pillar, dating from that time, implies that a monastery was already established during Ashoka's reign. Fa Hien speaks of two monasteries with monks in residence, while two centuries later Hsuan Chwang describes a mahavihara encompassing eight divisions. This contained a great temple with ornate balconies, over one hundred niches containing gilt images in its walls, and a statue of the Buddha in the teaching posture.

The last monastery constructed before the muslim invasion, the Dharmachakra-jina vihara, was the largest of all. It was built by Kumaradevi, queen of King Govindachandra, who ruled in Benares from 1114-1154. Here a surviving fragment of stone inscription records that in 1058 a monk presented a gift copy of the Prajna-paramita Sutra to the monastery: evidence of mahayana activity at that time. The discovery in the area of ancient statues of Heruka and Arya Tara shows that vajrayana was also practised there.

Formerly, two great stupas adorned the site. Only the Dhamekha remains, assigned by its inscription to the sixth century. The Dharmarajika stupa built by Ashoka, some say upon the very place of the teaching, was pulled down in the eighteenth century by Jagat Singh, who consigned the casket of relics contained within it to the Ganges river. Hsuan Chwang describes that Ashoka's pillar, which stood in front of the stupa, was so highly polished that it constantly reflected the stupa's statue of the Buddha.

Benares, which was the second city to reappear following the last destruction of the world, was also a site of the previous buddha's manifestations. Kashyapa, the third buddha of this aeon, built a monastery near Deer Park, where he ordained the brahmin boy, Jotipala, an earlier incarnation of Shakyamuni. Hsuan Chwang records stupas and an artificial platform at the places where several previous buddhas had walked and sat in meditation.

Deer Park was also the location of Shakyamuni's deeds as a bodhisattva in former lives. Hsuan Chwang mentions a number of stupas commemorating these near the monastery: one where the bodhisattva offered himself as the deer; another where, as a six-tusked elephant, he offered his tusks to a deceitful hunter; and a third where the bodhisattva had been a bird, with Maudgalyayana and Sariputra as a monkey and an elephant.

Another stupa commemorated the occasion when Indra manifested as a hungry old man and asked a fox, an ape and a hare (the Buddha in a former life) for food. The fox brought fish, the ape brought fruit, but the bodhisattva hare, having nothing else to offer, threw himself on a fire and offered his roasted body. Indra was so moved by this act that he took the hare and placed him in the moon. Many people in central Asia still refer to the moon as the hare sign, or worship the hare in the moon.

Today the actual site of the Buddha's teaching at Sarnath and the several ruins in the area have been enclosed in a pleasant park. Nearby, a well-planned museum houses a number of unearthed statues, many barely damaged, as well as several other findings from the site. The museum's entrance is dominated by the famous lion capital from Ashoka's pillar, which—an indication of the Indian Government's renewed interest in Buddhism—has been adopted as the national emblem. The wheel design on its base has become the central figure of India's flag.

Adjacent to the park is the Mahabodhi Society's Mulaghandaluti Temple, an imposing building containing certain relics of the Buddha. Close by is the Society's sangharama and a library possessing a rare collection of buddhist literature. Also in the vicinity are Burmese, Chinese and Tibetan temples, as well as a Tibetan monastery and the Institute of Higher Tibetan Studies, where two hundred young monks practise and study the many aspects of the Buddha's teaching, aspiring to qualify for the degree of acharya. There is also a Tibetan printing press, The Pleasure of Elegant Sayings, which over the last decade has published more than thirty Tibetan texts of buddhist treatises, otherwise hard to find. Thus the wheel of Dharma that Shakyamuni first turned at Sarnath continues to revolve.