"... and here at Kushinagar he entered parinirvana."

"How transient are all component things!
Growth is their nature and decay:
They are produced, they are dissolved again:
And this is best,—when they have sunk to rest."
Mahaparinirvana Sutra 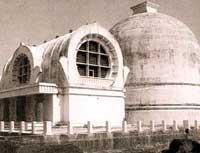 Last of the places of pilgrimage is Kushinagar, where Shakyamuni entered mahaparinirvana. This was the furthest he had reached on his final journey, which retraced much of the road he had walked when many years before he had left Kapilavastu.

When he reached his eighty-first year, Buddha gave his last major teaching—the subject was the thirty-seven wings of enlightenment—and left Vulture's Peak with Ananda to journey north. After sleeping at Nalanda he crossed the Ganges for the last time at the place where Patna now stands and came to the village of Beluva. Here the Buddha was taken ill, but he suppressed the sickness and continued to Vaisali. This was a city where Shakyamuni had often stayed in the beautiful parks that had been offered to him. It was also the principal location of the third turning of the wheel of Dharma.

While staying at Vaisali, Buddha thrice mentioned to Ananda a buddha's ability to remain alive until the end of the aeon. Failing to understand the significance of this Ananda said nothing and went to meditate nearby. Shakyamuni then rejected prolonging his own life-span. When Ananda learned of this later he implored the Buddha to live longer but he was refused, for his request had come too late.

Coming to Pava, the blacksmith's son Kunda offered him a meal which included meat. It is said that all the buddhas of this world eat a meal containing meat on the eve of their passing away. Buddha accepted, but directed that no one else should partake of the food. Later it was learned that the meat was bad. He told Ananda that the merit created by offering an enlightened one his last meal is equal to that of offering food to him just prior to his enlightenment.

Between Pava and Kushinagar the Buddha rested near a village through which a caravan had just passed. The owner of the caravan, a Malla nobleman, came and talked to the Buddha. Deeply moved by Shakyamuni's teachings, he offered the Buddha two pieces of shining gold cloth. However, their lustre was completely outshone by Shakyamuni's radiance. It is said that a buddha's complexion becomes prodigiously brilliant on both the eve of his enlightenment and the eve of his decease.

The next day, when they arrived at the banks of the Hiranyavati river south of Kushinagar, the Buddha suggested that they should go to the caravan leader's sala grove. There, between two pairs of unusually tall trees, Shakyamuni lay down on his right side in the lion posture with his head to the north. Ananda asked if Rajgir or Shravasti, both great cities, would perhaps be more fitting places for his passing. The Buddha replied that in an earlier life as a bodhisattva king this had been Kushavati his capital, and at that time there had been no fairer nor more glorious city.

The noblemen of Kushinagar, informed of the Buddha's impending death, came to pay him respect. Among them was Subhadra, an 120-year-old brahmin who was much respected, but whom Ananda had turned away from the monkhood three times. However, the Buddha called the brahmin to his side, answered his questions concerning the six erroneous doctrines, and revealed to him the truth of the buddhist teaching. Subhadra asked to join the Sangha and was thus the last monk to be ordained by Shakyamuni. Subhadra then sat nearby in meditation, swiftly attained arhatship and entered parinirvana shortly before Shakyamuni.

As the third watch of the night approached, the Buddha asked his disciples thrice if there were any remaining perplexities concerning the doctrine or the discipline. Receiving silence, he gave them the famous exhortation: "Impermanence is inherent in all things. Work out your own salvation with diligence." Then, passing through the meditative absorptions, Shakyamuni Buddha entered mahaparinirvana. The earth shook, stars shot from the heavens, the sky in the ten directions burst forth in flames and the air was filled with celestial music. The master's body was washed and robed once more, then wrapped in a thousand shrouds and placed in a casket of precious substances.

For seven days, offerings were made by gods and men, after which, amidst flowers and incense, the casket was carried to the place of cremation in great procession. Some legends say that the Mallas offered their cremation hall for the purpose. A pyre of sweetly scented wood and fragrant oils had been built but, as had been foretold, it would not burn until Mahakashyapa arrived. When the great disciple eventually arrived, made prostrations and paid his respects, the pyre burst into flames spontaneously.

After the cremation had been completed the ashes were examined for relics. Only a skull bone, teeth and the inner and outer shrouds remained. The Mallas of Kushinagar first thought themselves most fortunate to have received all the relics of the Buddha's body. However, representatives of the other eight countries that constituted ancient India also came forth to claim them. To avert a conflict, the brahmin Drona suggested an equal, eightfold division of the relics between them. Some accounts state that in fact Shakyamuni's remains were first divided into three portions—one each for the gods, nagas and men—and that the portion given to humans was then subdivided into eight. The eight peoples each took their share to their own countries and the eight great stupas were built over them. In time these relics were again subdivided after Ashoka had decided to build 84,000 stupas. Today they are contained in various stupas scattered across Asia.

In later times Fa Hien found monasteries at Kushinagar, but when Hsuan Chwang came, the site was almost deserted. Hsuan Chwang did see an Ashoka stupa marking Kunda's house, the site of Buddha's last meal. Commemorating the mahaparinirvana was a large brick temple containing a recumbent statue of Buddha. Beside this was a partly ruined Ashoka stupa and a pillar with an inscription describing the event. Two more stupas commemorated former lives of the Buddha at the place. Both Chinese pilgrims mention a stupa where Shakyamuni's protector Vajrapani threw down his sceptre in dismay after Buddha's death, and some distance away a stupa at the place of cremation and another built by Ashoka where the relics were divided.

Kushinagar was rediscovered and identified before the end of the last century. Excavations have revealed that a monastic tradition flourished here for a long time. The remains of ten different monasteries dating from the fourth to the eleventh centuries have been found. Most of these ruins are now enclosed in a park, in the midst of which stands a modern shrine housing a large recumbent figure of the Buddha. This statue was originally made in Mathura and installed at Kushinagar by the monk Haribhadra during the reign of King Kumaragupta (415-56 CE), the alleged founder of Nalanda Monastery. When discovered late in the last century the statue was broken but it has now been restored. Behind this shrine is a large stupa dating from the Gupta age. This was restored early in this century by the Burmese. Not far away a small temple built on the Buddha's last resting place in front of the sala grove has also been restored. Some distance east a large stupa, now called Ramabhar, remains at the place of the cremation.

On one side of the park a former Chinese temple has been reopened as an international meditation centre. Next to it stands a large Burmese temple. On the south side of the park is a small Tibetan monastery with stupas in the Tibetan style beside it. Thus also at Kushinagar one can see dharmic activities alive even today.