Below is an excerpt from Atisha: A Biography of the Renowned Buddhist Sage 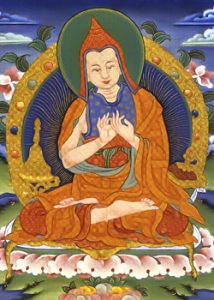 The Guru's Knowledge of the Origin of the Dharma

To those noble persons in whom the religion is rooted, I pay homage. On living beings suffering from the scorching heat of affliction (klesha), the vault of Dharma showers clouds of loving kindness (maitri) and rains down compassion (karuna) that refresh those beset by afflictions' scorching heat. To that Dharma King, I bow my head.

From his ocean-vast and unsullied story, without additions for changes of any sort, to the best of my ability, I have gathered some drops. O give ear.

In the eastern part of India, in the country named Bengal (Sahor), the ruler was a religious king named Kalyana Shri. King Kalyana Shri brought the prosperity of his kingdom to its zenith. His palace had a golden victory banner encircled by countless houses and there were great numbers of bathing-pools encircled by 720 magnificent gardens, forests of Tala trees, seven concentric walls, 363 connecting bridges, innumerable golden victory banners, thirteen roofs to the central palace and thousands of noblemen in the palace.

All this splendour matched the King of Tonkun's (one of the Chinese kings); the dignity of the monarch's royal bearing and his air of great authority were like those of the great god Indra. His subjects were as numerous as the inhabitants of a city of Gandharas and their religious attainments could be compared to those of Aryadharma. Shri Prabhavati, the consort of this devout king, was like a goddess. She was a beautiful and chaste woman who worshipped the Triple Gem, and was beloved as a mother by all human beings. This queen had three sons, namely Shrigarbha, Chandragarbha and Padmagarbha. The story of these three is seldom to be found in other books. The second son, Chandragarbha, was my noble guru. At the auspicious moment of his birth, flowers rained down upon the city, a rainbow canopy appeared, and the gods sang hymns which brought gladness and joy to all the people. For eighteen months he resided in the capital and was excellently reared by eight nurses.

To the north of the palace there was a sacred place called Vikramashila Vihara. To make offerings [to give thanks for the Prince's birth] at that place, the King, Queen and their ministers, escorted by 500 chariots full of lovely girls elegantly adorned with ornaments and surrounded by hundreds upon hundreds of musicians, carried the innumerable jeweled articles necessary for the votive rite and all went to that place singing.

My infant guru, who already seemed like a child of three, had so many beauties of person that the eyes were, dazzled. The boy, having been crowned and adorned with god-like ornaments, was carried by his father wrapped in fine muslin garments. When the people saw him they felt so full of happiness that they could not tear themselves away.

Those who stood by exclaimed:

"At the time of your birth, the tent of the sun was set up and melodious songs were heard by the people. So our most cherished desire was to meet you. And now, having seen you, we are filled with joyous awe."

Then the excellent Prince enquired: "Who are these people, O parents?"

"These are your subjects, Prince," answered his parents.

Then the excellent Prince continued:

"May they be possessed of merit like that of my parents. May they rule kingdoms that reach the summit of prosperity. May they be reborn as sons of kings and may they be sustained by holy and virtuous deeds."

Then, when the royal procession came safely to the Vikramashila Vihara (the main chapel at that place of pilgrimage) the excellent Prince, having prostrated himself to the Triple Gem, recited this melodious song of praise:

When these words were heard by the King, Queen, ministers and monks, they were filled with joyful wonder and all declared with one voice that the Prince was destined for greatness. Then the King, Queen and attendants declared:

"May we, by gathering merits through paying reverence and making offerings, be able to make offerings to the Triple Gem from life to life. And, by the virtue of those merits, we pray for the long continuance of our religion, for which we shall make offerings to the sangha. O, may we be delivered from the sufferings caused by defilements."

When the Prince heard their words, he looked at his parents and exclaimed:

"May I never be bound by worldly ways. May I be taught the holy way of the monks and humbly worship the Triple Gem. May I feel pity for all beings."

His parents and the others felt full of wonder when they heard the sayings of the Prince. This was the first preaching of my guru. The Prince, by the age of three, had become well-versed in astrology, writing and Sanskrit. At six years, he was able to distinguish between the Buddhist and non-Buddhist doctrines. From then up to the age of ten years, he took the Triple Gem for refuge by observing the precepts (shilas) of the upasakas, bestowing charity (dana), studying happily, reciting prayers, seeking out people of noble character, obeying and serving his parents humbly and with sweet words, enjoying every sort of religious dance and sacred song, paying respect to holy men even from a distance, looking at worldlings with heart-felt pity, helping those who were wretched, and doing many such noble deeds. When the Prince reached the age of eleven years, the ministers and subjects brought twenty-one girls of noble parentage to him and the King and Queen presented them with valuable gifts.