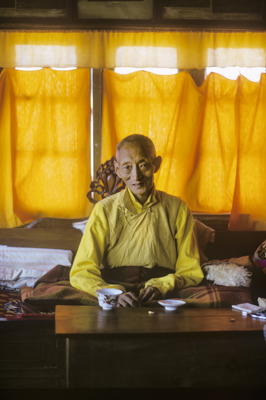 The Buddha said that many hundreds of Dharma traditions would come into this world. All traditions would arise from the perfect action of awakened buddhas and would be their means of helping sentient beings. What would these means be like? Entrusting ourselves to some religious traditions would enable us to take birth in the elevated planes of those religions: as human beings or as desire realm celestial beings. Through entrusting ourselves to others, we could be born into the seventeen planes of the form realm or in the four states of the formless realm. Moreover, they reveal ways of blocking the access to ill-gone states (as animals, etc.) and gaining elevated planes of existence. All give us strength and transforming powers.

Some practices are meant to give us the capability of attaining Lesser Vehicle levels of the Enemy Conqueror and the Solitary Realizer (Hinayana arhat and pratyekabuddha) and others give the ability to reach the Greater Vehicle (bodhisattva and Buddha). They do this, and so I believe in all religious traditions. All derive from the perfect actions of the Buddha and give sentient beings release from cyclic existence in both temporary and ultimate senses. Accordingly, these are the subjects I teach my disciples.

While I was in Tibet there were eight major Buddhist traditions, but nowadays in India, the Land of Superiors, only four have been able to flourish. These are Sakya, Gelug, Nyingma and Kagyü. Again, each conveys the stainless word of the Buddha above all and has produced successions of expert scholars and realized saints (pandit and siddhalabdha) to further it.

Thus each is like pure gold, authentic Dharma untainted by anything vile, a thing most people don’t find even when they search, something that can lead to liberation from cyclic existence and to omniscience. This is Dharma in all its profundity and vastness.

If they are all the Dharma of the Buddha, why are there all these different systems? Generally speaking, the variety is produced according to the inclinations of different people. Each particular system is distinctly for the aptitudes of particular people whose minds are ready to be cultivated by such a system.

All four major traditions have in common the four ways of converting frames of thought, going for refuge, generating the two precious gems of relative and absolute enlightenment mentalities, and evolution and perfection phases. It is not for anyone to call one good and others bad. All are only good.

Nonetheless, each individual tradition has its own records of profound gracious advice from the personal experience (gDams ngag) of particular gurus and from the oral tradition techniques for efficiency (man-ngag) transferred from one vessel (i.e. disciple) to another. It is while someone is involved in the practice of his religious system that he is given detailed essential pith instructions by the noblest lamas.

It seems to me that each tradition must benefit someone who has the inclination and prior associations and so I have no partiality to any of the Dharma traditions. Call them systems of gracious advice or Dharma; all are what I teach.

In addition, all traditions stress good practice of the principle of cause and effect and in this every one of them maintains above all the four ways of converting of thought—the turning about in our patterns of thought regarding this cyclic existence—as the means of a basis for being able to aim for liberation and buddhahood.

As for a general account of my lamas: in Tibet the lord of all doctrine is His Holiness the Dalai Lama. Everyone knows that. As such, out of his great compassion he puts into operation the means for all presentations of doctrine without distinction enabling them to flourish more and more and for helping particular sentient beings and migrating beings in general. Consequently, he is also an exceptional lord of exposition in each doctrine.

At present the lord of Kagyü doctrine is His Holiness Karmapa, whose name is well renowned, the lord of Nyingma doctrine is Kyabje Dudjom Rinpoche, and the lord of Sakya doctrine is Sakya Dagchen Rinpoche. While acting as the heads of doctrine, these four provide (spiritual needs) with great kindness and, due to this, in places like India, Nepal, Bhutan, and Sikkim, the Buddha’s teachings are flourishing and radiating like a shining sun.

As far as I’m concerned, I have been fortunate enough to gain many empowerments, transmissions and discourses from His Holiness the Dalai Lama and his two tutors, Kyabje Ling Rinpoche and Kyabje Trijang Rinpoche. I have also received many from my root guru, His Holiness Karmapa and from both Kyabje Dudjom Rinpoche and Sakya Trizin Rinpoche. By entrusting myself to many lamas of all four traditions I am creating good associations and a great sense of belief. Furthermore, within my group of disciples, there are many monks and lamas of the four traditions and I feel that I serve their doctrine without discrimination in tenets.

However, I must be really fortunate to have Sakyapas, Nyingmapas, Kagyüpas, and Gelugpas all in my monastery. Subsequently, through bearing all tenets of the religious traditions as my crown, and revering them, I hope to be a practitioner of them all and similarly intend the recipients of my teaching to have great belief in all doctrine.

When someone has an association with some system of Dharma and a lama, it is permissible that he mainly practices that particular doctrine. Such tendencies are the result of the force of his individual activities in prior lifetimes. Apart from this, I feel that to be a believer without distinction in all tenets is authentic evidence of a noble being. It is an outcome of having accomplishments of expertise, sincerity and goodness, that the lamas, abbots, masters and tulkus can explain, debate and compose, bringing about the welfare of sentient beings; and all have great belief without distinction.

So it is that the teachings of Buddha are spreading through the West for the first time. In this pioneering context you might think yourself a practitioner merely through having heard some scanty pieces of Dharma.

On the other hand, not remaining content with a limited understanding of the Dharma, you might make a proper study of it and from the outset with the motivation of benefiting sentient beings, you could put into practice all of the teachings about the opportunities so hard to achieve (precious human body), death and impermanence, cause and result and the faults of cyclic existence, followed by the ten grounds and five paths up to the ultimate: buddhahood.

Thus, to whichever lama you might entrust yourself—Sakyapa, Gelugpa or Nyingmapa—if with belief you combine your mind with the aim for perfection of the practices by every means, then doing them will be worthwhile.

Otherwise, by pursuing diverse aspects of Dharma in meager ways, learning a few phrases here and there, and acting out the semblance of being a practitioner, it will be difficult to derive much benefit. Is it not better to practice perfection without cheating yourself?