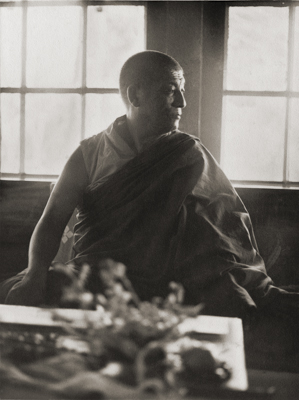 ngkhapa has written: The development of an awakening mind (bodhicitta) is the framework of the Mahayana path and the foundation and basis of all the great waves of bodhisattva actions. Like an elixir that turns all metals to gold, it transforms all actions into the two collections (of wisdom and merit). It is a treasure of merit that accumulates limitless collections of virtues. Knowing this, the heroic sons of the conquerer, Buddha, adopt this jewel-like development of an awakening mind as their fundamental (practice).

The following is an English rendering of the oral instructions of Geshe Rabten, a Tibetan lama who has been instrumental in bringing the pure teaching of Buddha Dharma to the West, making it clear, and causing it to increase and flourish.

From the time of his own childhood, in Kham province, Tibet, Geshe Rabten Rinpoche had admired the Buddhist "monks in their maroon robes." At the age of eighteen, he left home to go to central Tibet where he entered the great Sera Monastery and began the twenty-four years of continuous study and personal hardship that would lead, in 1963, to the highest degree award of lharampa geshe.

At Sera, while attending classes with his gurus and memorizing large numbers of root texts and related commentaries, Geshe Rabten Rinpoche spent most of his days, and nights, engaged in debate, the Tibetan learning method for honing the intelligence and deepening understanding. He thoroughly mastered the traditional curriculum leading to the geshe degree: basic logic, mind and its functions, and logical reasoning (pramana); general study of the perfections (paramita); specific study of the nature of existence (madyamika); ethics (vinaya); phenomenology (abhidharma); review of ethics and phenomenology (karam geshe level); and final review of the the great treatises (lharam geshe level—only the two best students per year are awarded the title of lharampa geshe).

During this time Geshe Rabten Rinpoche also studied the graded path to the attainment of enlightenment via sutra practice and tantra. He has received many empowerments, first from the former incarnation of Gonsar Rinpoche, and later from His Holiness the Fourteenth Dalai Lama and his Senior and Junior Tutors, the late Ling Rinpoche and Trijang Rinpoche, and many other lamas.

When, in 1969, a group of Westerners interested in Buddhism wanted teachings, His Holiness the Dalai Lama requested Geshe Rabten Rinpoche to instruct them, as His Holiness knew Geshe-la would be able to present to these students such teachings as the four noble truths and the entire path to enlightenment, clearly and effectively.

Geshe Rabten Rinpoche remained in meditational retreat in the Indian Himalayas until 1974, when he went to Europe to conduct meditation courses. In 1975, at the request of his Western students, His Holiness the Dalai Lama sent Geshe Rabten Rinpoche to Europe again, this time to give sustained teachings on the Buddha Dharma. And in 1979, the monastic institute, Tharpa Choeling, was established near Mt. Pelerin, above Lake Geneva in Switzerland. At Tharpa Choeling, a monastic education based on Geshe's own at Sera is available to serious Western students.

After Lord Buddha achieved supreme enlightenment he gave numerous sermons on the path to enlightenment, varying each teaching according to the mental state of the listener and the occasion. These teachings of the Compassionate One collected together comprise the three paths of Buddhism.

Among the vast quantity of Buddhist scriptures are oral and written teachings that have been passed on from Lord Buddha himself, through Maitreyanatha, Asanga, Atisha and other great gurus up to the venerable Tsongkhapa, in an unbroken line. These particular teaching traditions have been carried on by the great Tibetan teachers so that we fortunate practitioners today still have the chance to be guided by them. The Graduated Path to Liberation is an English rendition of oral instructions of Geshe Rabten Rinpoche, whose being and teachings radiate both wisdom and compassion.

May this benefit all beings.