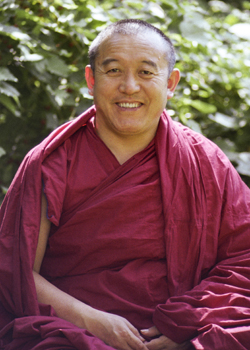 I have been asked to give a talk on the Two Truths: the conventional or surface level of truth and the ultimate truth. Looking at it one way it seems as if I've already finished my teaching because there are just these two words: conventional and ultimate, and that's finished! But in fact these two truths subsume within them all of Buddhism, so there is more to talk about than you'd find in a huge beak.

I ask all of you in this special place of Bodhgaya to bring up within you a special motivation. Every living creature, no matter who they are, are living creatures seeking happiness. At the same time they seek happiness, they are unaware of the cause of happiness, so call up this motivation: that to relieve them from their unhappiness, I must myself achieve all the wonderful qualities, all the excellence of an enlightened state, in order to teach them how to free themselves.

Living creatures, just like ourselves, are defined by seeking to avoid unpleasant, suffering situations, and seeking to place themselves in happy situations. Animals, from insects on up, have knowledge of methods to immediately remove suffering, they have this intelligence. The human being differs from the animal as they have the intelligence to take into account a much greater time span. They can begin to do things to alleviate states that they will otherwise experience a long time in the future—for example, getting a good education so we can find a job, make money, and live well in the future. At this point we are talking generally; spirituality hasn't entered into the discussion at all.

If one performs wholesome deeds, one's future will be in a happy state. If one has performed unwholesome deeds, one has set down the causes to find oneself in a state of woe. Spirituality then enters the thought process of a human being contemplating a future that goes beyond simple death.

Everything that the enlightened one spoke of leads back to the understanding of the two levels of truth. (This doesn't mean there is no third truth, for example the Four Noble Truths and so on, so you can have sub-divisions.) Since you have two levels of reality, you have to have something being sub-divided, or categorized in two categories.

So you can ask yourself, "What is being sub-divided?" and the answer is knowables or objects of knowledge (Tibetan: she-ja). Here, a knowable is simply something that is existing. To exist means to be knowable, and to be knowable means to exist.

For example, I could have the idea of antlers on a rabbit—it could come up in my mind. I could fabricate this awareness, and in that sense rabbit's antlers are something known but they certainly don't exist. [The problem] here is that when you equate things that exist and things that are known, they are known by [a valid] awareness but not by [just any] awareness. In other words I could get out of this difficulty by saying that, true, rabbit's antlers are known by [a particular person's] awareness, but this doesn't necessarily mean that they are known by awareness!

So what about this other truth, the conventional, surface level of truth: how does one come to understand this second of the two truths if the ultimate reality is understood in this way? This is samvrtisatya. Samvrti is total covering up, and covering here means ordinary awareness covering that which is real. Here again satya is truth, but truth for an ordinary awareness. In other words, all the things that are true for ordinary minds like our own that are taken as real by them—are conventional truths, therefore, truth for an ordinary covering mind.

In the scholastic tradition we say that anything that is known will always be included in one of these two levels of reality. Anything not covered by these two levels is beyond the sphere of what is knowable. There is a deep logic here—that these two categories, the two truths, are an exhaustive description of all that there is.

Here is how it works. Truth and lie go together, don't they? If a person makes a statement that mirrors reality, then that statement is true. However, a statement not mirroring reality is a lie.

So you have one being necessitated by another in a see-saw-like fashion, and from that account you can extrapolate out to show that it is a statement that is exhaustive of all knowables, of all that exists.

In Buddhist systems of ideas, there are many interpretations of what exactly these two levels of truth are. They are set forth as the four Buddhist schools of philosophy.

In the most profound school, the Middle Way Consequentialist school, just what is emptiness or the ultimate? It is this: that in fact nobody or nothing, anywhere, has anything that inherently makes it what it is. Nothing has its own personal mark. Everything exists simply through language, through ideas.

The absence of something, the total absence, the total not-being, non-existence of anything that is not there through the power of language and thought is shunyata, emptiness, the ultimate truth.

When one talks of an ultimate truth, of emptiness, one has a focus; one is looking at objects and finding them to be totally empty. What one is looking at and finding to be empty is very important. The identification of things first becomes an important thing to do because the ultimate truth isn't something immediately apprehensible by our senses—we can't see it. We have to arrive at it through our thought processes, and in order to do this we have to use reasoning. This reasoning takes as its point of departure certain things or bases, so we must identify these in the first instance.

Let's start by trying to identify what are classically the most important of these bases, the five aggregates or skandas. In the Heart Sutra it says, "He looked and saw that the five aggregates are empty of inherent existence." So if you don't know what these five are, how can you look into the ultimate truth of them?

The second heap is that of feelings. What are feelings? They are the experiences one gets out of things: pleasant experiences, neutral experiences and unpleasant ones.

The next heap is discrimination, which is defined as that part of the mind that functions to identify particular things as what they are.

The fourth aggregate of created things has most of the non-associated created things. It's a catch-bag for everything not included in the other four heaps.

And what is the fifth heap? This is all our awarenesses or consciousness or thoughts. This is generally looked at as sense-based awareness coming from a thinking mind.

One can only focus on the reality of emptiness when one has seen the size, the dimensions, of what one is refuting or denying.

For example, a seedling isn't produced as something there under its own power, as something that is inherently what it is. Why? Because it is produced from causes and conditions. That's how you break down the meaning of the statement to formulate it as a reason for the hidden meaning, which is emptiness, to come clear to the mind.

Lama Tsongkhapa writes in his famous Praise to Dependent Arising, "What is more amazing, what better way of expressing a reality has ever been found? Namely that anything that depends on conditions is empty."

There are many different reasons a person can use to come to understand emptiness. But here we meet with the king of all reasonings—dependent arising—because being produced or arising dependently is the reason for everything's emptiness. Using this reason, one avoids the extreme of nihilism, because dependent arising shows something is there; nevertheless, because it is a reason that shows emptiness it also removes eternalism.

As the great Aryadeva said, "Anyone who gets a view into one reality gets a view into all realities." What he is saying is that if one plumbs the depths of reality of anything, one doesn't need to go through the whole process again with another object. Just bringing to the mind the reality you've seen in one object or person, and turning the mind to another, you will look at its reality as well.

That's why every one of our sadhanas without exception starts with the mantra that means "Om, this is purity, all Dharmas are pure, I am that purity." Before doing any sadhana one brings to mind this fact of the ultimate reality—of emptiness.