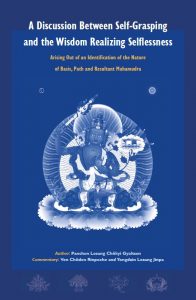 Below is an excerpt from the commentary A Discussion Between Self-Grasping and the Wisdom Realizing Selflessness.

I prostrate to the youthful Manjushri.

The meaning of the excellent treatise known as A Discussion Between Self-Grasping and the Wisdom Realizing Selflessness, I explain in a limited way in three parts: Introduction to the Explanation, A Clear Elucidation of the Explanation and Actions Concluding the Explanation.

The Introduction to the Explanation

I prostrate to my guru, the extraordinary deity.

There is a purpose to the homage. Divine beings, before engaging in critical white actions such as composing treatises, pay homage to holy objects. Similarly, Panchen Losang Chökyi Gyaltsen also pays homage, to accord with the actions of holy beings, to pacify obstacles to the composition of the treatise, and to be able to complete the composition.

Basis, path and resultant mahamudra,     [1ab]
this is an identification of their nature.

A Clear Elucidation of the Explanation

Explaining the Mahamudra of Basis, Path and Result

Explaining the Mahamudra of the Basis According to the Sutra System

The very minds of the three realm sentient beings,     [1cd]
and specifically one’s own very mind,
since time beginningless and nonabiding,     [2]
from whence ignorance came into being,
have been abiding naturally with the mind’s nature.
This is the mahamudra of the basis.

The mind's clear and knowing nature in the continuum of all sentient beings in general, and in particular of practitioners practicing the path, has been there from its side since time beginningless and nonabiding. Simultaneously with the existence of mind, although unknown to and unrealized by it, has been its mode of abiding, i.e., emptiness, which has been existing and abiding simultaneously with it. This is the mahamudra of the basis, according to the sutra system.

Explaining the Mahamudra of the Basis According to the Tantra System

From the tenth ground to an ant,      [4bcd]
the mother clear light at the time of death
is also the mahamudra of the basis.

When the coarse body of the elements ceases, the stages of death set in, starting with the inner sign that the earth element dissolves into the water element, the mirage-like vision, via the sign of appearance dissolving into near attainment, up to the seventh sign, a clear autumn sky pervaded by the darkness of dusk, at the end of which one briefly falls unconscious. After this brief unconscious state at the end of the preceding seven signs, has cleared, the mother clear light, the clear light mind of death, which has eliminated all dualistic appearances aside from the aspect ascertaining the sky of a clear autumn morning, free from the three conditions of arising, as empty of its hue, arises.

In the tantric system, this mind of clear light is the mahamudra of the basis for all sentient beings, from the bodhisattva on the tenth bhumi down to ants and other insects.

Explaining the Mahamudra of the Path According to the Sutra System

They who have not realized this, grasp at true existence.    [3]
and have been wandering in cyclic existence up to now.
The direct antidote to this is the wisdom that explicitly realizes this selflessness. There is no antidote apart from it.     [4a]

As Panchen Chökyi Gyaltsen explained earlier, although emptiness, the mode of abiding of the mind, started to exist at the same time mind came into existence, the migrators who have not realized this, grasp at any object that appears to the mind, as truly existent. Motivated by this true-grasping, they accumulate karma and have wandered in cyclic existence up to now. The direct antidote to this is the wisdom that explicitly realizes the mind and all other phenomena as empty of inherent existence, that realizes them to be selfless. Apart from this, there is no antidote to the grasping at self.

Explaining the Mahamudra of the Path According to the Tantra System

When, having mixed it with the clear light of meditation,     [5abc]
one abides naturally in meditative equipoise,
then it is the mahamudra of the path.

When one can abide naturally in the meditative equipoise that mixes the earlier explained mahamudra of the basis and the clear light that arises through the force of meditation, then this is the mahamudra of the path.

Further, while abiding in meditative equipoise,     [5d]
the meditation on wisdom without elaboration.   [6ab]
is called the view of path mahamudra.

Explaining the Mahamudra of the Result

When this alone manifests without distortion.    [6cd]
it is called resultant mahamudra, the path of seeing.
Just this, stabilized and increased, is the path of meditation.     [7]
These are called the paths of meditating and training.
When the obscurations to knowledge are purified
the result of no more learning manifests.

When just this, the direct realization of emptiness, is repeatedly meditated upon, stabilized, and its power increased, then it is called the path of meditation. The paths of accumulation, preparation, seeing, and meditation are called the learner paths. Once a bodhisattva attains the path of seeing and then increases the realization, one refers to the attained realizations as the first ground, second ground, and so forth, up to the tenth ground. The different grounds are labeled relative to their level of realization.

At the time of the eighth, ninth, and tenth ground, the bodhisattva relies on the antidotes to the obscurations to knowledge to purify them sequentially, so that at the culmination of the tenth ground the obscurations to knowledge become extinct. The moment after they are purified and simultaneously buddhahood, the state of no more learning, manifests.