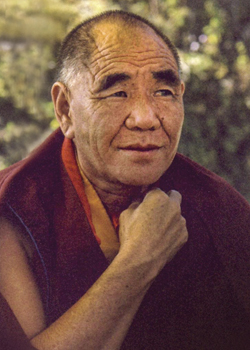 Geshe Lama Konchog (1927-2001) was born in Tibet and studied at Sera Monastery from the age of seven. He received many precious teachings from high lamas who had completed the path, as well as going on pilgrimage and retreat. His main guru was His Holiness Trijang Rinpoche.

After leaving Tibet in 1959, Geshe Lama Konchog travelled to the Tsum valley, a remote border area near Ghorka in Nepal, where he spent 26 years in retreat, sometimes in a cave used by the great yogi, Milarepa. He completed 2,000 nyung-nä retreats and lived in strict austerity for at least seven years. He was a highly realized teacher and accomplished meditator, and was able to heal many people through the power of his realizations.

Geshe Lama Konchog arrived at Kopan Monastery in 1985, where he resided for 18 years, devoting himself to the monks and nuns there. He also travelled to teach students in Asia, Europe and Australia. Geshe-la passed away on October 15, 2001 and his incarnation, Tulku Tenzin Phuntsok Rinpoche, was found and enthroned in 2006.

Kyabje Lama Zopa Rinpoche had this to say about Geshe-la: "Besides having tantric realizations, he is a definite Mahayana practitioner, a definite yogi who has the realization of bodhicitta and the unmistaken realization of emptiness...He is an extremely qualified teacher, therefore it is extremely fortunate to receive blessings and teachings from him and have pujas performed by him. His realizations are such that for many of us, it would take lifetimes to attain such realizations."

A Commentary on the Seven-Point Mind Training 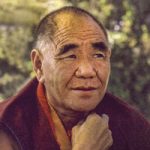 A teaching on the Seven-Point Mind Training by Geshe Lama Konchog at Atisha Centre, Bendigo, Australia, from October 31 to November 3, 1987.

A Commentary on Right Effort

A teaching by Geshe Lama Konchog on applying the force of right effort to our practice given at Amitabha Buddhist Centre, Singapore.

A Commentary on the Heart Sutra 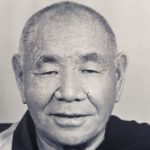 A teaching on the Heart Sutra, a profound text that contains the condensed meaning of all three levels of the Prajnaparamita sutras given by Geshe Lama Konchog in Amitabha Buddhist Centre, Singapore.