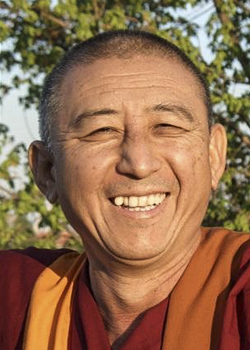 Geshe Thubten Soepa was born in Zanskar, India in 1955. At the age of fourteen he entered the monastery of Dromo Geshe Rinpoche in Kalimpong and at 19, he was sent to Sera Je Monastery in South India.

Geshe Soepa took his novice vows before Serkong Tsenshab Rinpoche and his full vows before Kyabje Ling Dorjechang, the 97th head of the Gelug tradition (Tib: Ganden Tri Rinpoche). He also received many teachings and initiations from them, as well as from Ganden Zong Rinpoche. He attained the lharumpa geshe degree at Sera Je in 1997.

After three years as resident teacher at Dzongkha Chode monastery, Lama Zopa Rinpoche invited Geshe Soepa to be the resident geshe of Aryatara Institut in Munich, Germany, where he taught for ten years.

Geshe Soepa has travelled extensively in Europe and the United States, and teaches at many FPMT centers around the world. He is respected for his teachings on cherishing animals and is well known for his advocacy of animal rights and his stance on leading a vegetarian life.

Protecting the Lives of Helpless Beings: The Udamwara Lotus Flower 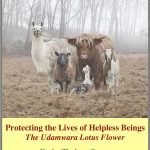 A "must-read" for all Buddhists, this text presents a detailed discussion in support of vegetarianism and animal welfare. Now available as an ebook. 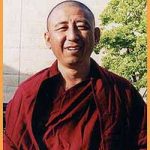 Geshe Thubten Soepa gives a teaching on why we should be vegetarian and protect the lives of animals.

Heart of Joy, Message of the Buddha (French) 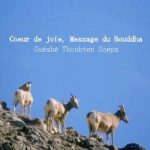 French translation of teachings on the beneficial practices of giving up killing and protecting life.